We are hopeful Bluebird landlords again!!

Their chosen nesting box 2 is in a new location. Interestingly, last years box has yet to be occupied. Altho other birds have tried. I emptied the start of many undesirable nests. Both boxes were left open periodically to deter them.

I can't help but wonder if the resident bluebird pair is the same as last year, and somehow remember the demise of their young in box 1 (same location).

I check both boxes on my daily walks.

We had a cool Spring. I was beginning to think the bluebird nesting boxes would not get used this year, although I spotted Bluebirds nearby on several occasions.

Last year a nest appeared April 18th and 5 eggs on May 6th. 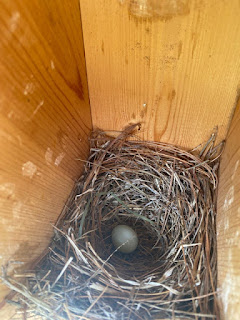 For several days, there was only one egg. 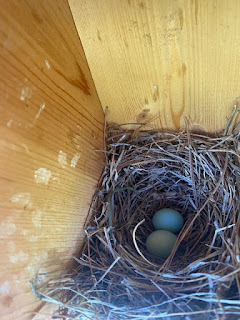 Then there were two eggs, and counting. I noticed the new egg was greenish and a bit larger. 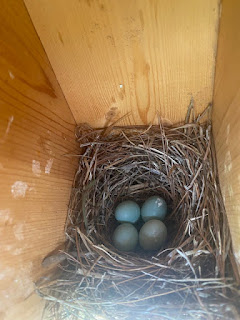 By Sunday, a fifth and final egg appeared. 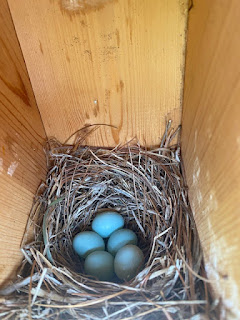 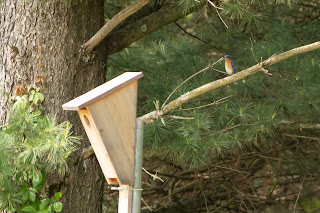 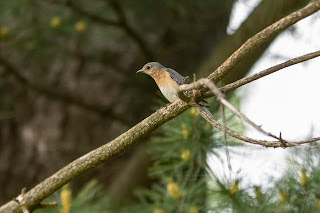 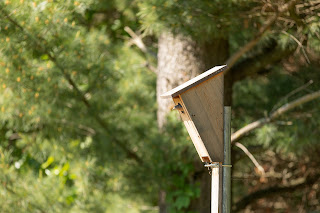 I see the female frequently caring for her eggs

We have not mounted a raccoon baffle, as suggested in the guide. I am certain coons were the predators that ate the babies from box 1 last year. Our trail camera shows a well fed raccoon pair that frequents the box 1 area.

Brad thinks the raccoons will not be able to climb the metal poles.

I can only hope he is right, or I could grease the poles. Raccoon spikes are an option. I know the varmints are not fond of spicy scents. I could make a spray, or hang a bag with spices. Finding & hanging the baffle materials myself is another option. That would be comical & likely scare more than raccoons away.

I have stopped checking the box with eggs for now. Our Eastern Bluebird eggs should hatch around June 17-19th.

I have high hopes of seeing the nesting box residents thrive this year.

Best wishes for a good hatch! Every time I think about putting up nest boxes the House Sparrows come back.

Here’s hoping they survive. You’ve done all you can to give them the advantage. It’s fun to watch nature heal, and replenish, itself. We had the worst heat and drought last year, but this year is the wettest and coldest, and it’s helping to repair the damage.

How awesome! We have two bluebird couples that have taken up residence somewhere close by.
We enjoy them every day when they dart about.

This is so exciting! I hope everything goes well for them this year!

We have two pair and I hope they have eggs that hatch! They are fun to watch!