It is official, Cierra will be bred to Whizkey & Diamonds Spring of 2021. Well, as official as officialness can be when an official contract with legalese is signed and you are officially dealing with the unknown.

Brad had a good phone conversation with the associated contact at the well-known breeding facility that is standing the stud, and was sent an application that day. We met with Brad's trainer to see if she saw anything unusual on the contract. The requirements looked standard to her. He signed, sealed and delivered the contract back, more like signed, scanned and emailed it back. He tried not to wonder patiently waited for one week for a response that they had received the application, and then followed up. Cierra's application was indeed received, and accepted. It was a pleasant surprise to hear they also gave him an early booking fee reduction. It is common, but wasn't noted anywhere therefore unexpected. Guess we didn't need to wonder if Cierra would be accepted after all. 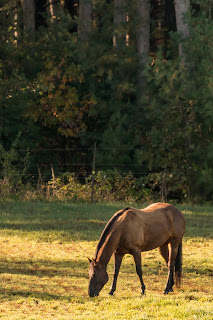 Below is a screenshot (aka borrowed) photo of WhizKey & Diamonds in his younger years, the one that made me stop scrolling and look into him. Something about his expression and build, not to mention I am a sucker for flowing manes. The powers that be are wowed by Whizkey and his off-springs records and collective earnings, but that was not why I chose him as my top ranch stud pick. I not only liked what I saw, I liked what I read. In particular what was said about his demeanor, handling and his off-springs trainability. Anyone can claim anything, but I believe it when I read and hear similar from different sources. Wish we could meet him in person, but I am not even going to ask considering the pandemic. And no, I will not let Brad forget that I picked him! Unless the prospective foal turns out to be a very naughty handful, in which case Brad said he would officially name it "Aurora's Diamond" ~ ha ha very funny!! 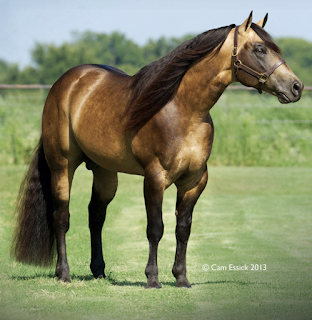 not my photo, credit noted above

I still do not know Whizkeys color genetics (related links do not work) other then he is a Buckskin with a "black type pedigree". I used the most common color generator for a guesstimate. It has changed since I last played with it, or perhaps I used a different one. I used to be able to enter a specific color code. These auto results do not match Cierra (Cream result is wrong, she is CR and no clue where the little n comes from). I should could dig deeper, but color genetics make my brain hurt. With all that said, it doesn't really matter what color is produced as long as the foal is healthy. 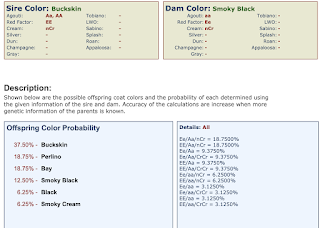 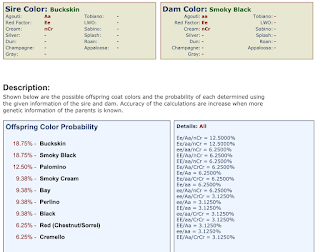 Future plans include moving Cierra Winter of 2021, at some point to live (not train) temporarily at our trainers for a few months until she is bred in April. As you can imagine, I am less then thrilled about moving her again. However, that show barn is heated during the cold & lit 24/7 and I am told that will regulate her cycles. Brad assures me the move is in Cierra's best interest, and it is after all his mare. I know Cierra will have excellent care. Our trainer has extensive experience monitoring horses in general. She has lovingly taken on many horses requiring special care from owners she knows. I am always learning from her. This whole breeding/foaling process will be exciting, and no doubt the cause of many future sleepless nights. Cierra will have other adjustments in her future like birthing etc. We think she is going to be a great mom. The move will likely be the easiest adjustment. We too will have adjustments coming our way. As long as everything goes well, it will all be worth it! There is nothing I enjoy more than watching Brad interact with young horses, he is sooo good with them. I also look forward to having a young horse to love on (and photograph) !!
Truly hope this upcoming adventure adds more to our homestead dreams then we ever imagined. Also hoping that you won't be reading another "official" future post about the foals name being "Aurora's Diamond"...!!!