We continue to enjoy arena riding our horses. Sometimes in the outdoor, sometimes in the indoor and some days we ride in both. It is really refreshing to ride inside under the fans, after baking in the sun. Without pesky flies and dusty wind. 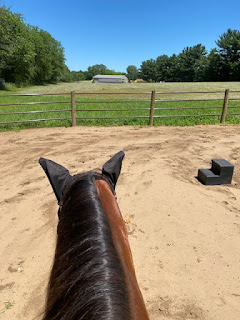 He is really trying hard to do everything he is being asked. I just hop on these days and we warm up together. He is still a bit off when trotting at first. It seems to improve with riding. Koda is almost at the two month mark with his Cosequin supplement. I don't think it is doing much. To give the supplement a fair chance, we will keep giving it to him for a while.

Koda is a little less fluffy, so that helps. His girth is fitting better. We are still mostly walking or doing obstacles. Trying out all the stuff we used to do on a regular basis.

He is being such a good riding partner and tries to help, even when not asked.

At the end of our ride, I opened the arena gate to ride out. I didn't get it swung open enough. Koda reached his nose out and nudged it open the rest of the way for us to ride through. Off we went, on our first field/trail ride this year. Brad & Cierra followed us out. We rode the field perimeter. Cierra really moves out, so we ended up following them back to the barn at a distance. We took the wooded path across from our house. They continued further down the path, while Koda & I rode back to the arena to retrieve my phone.

My phone doesn't stay in my back pocket. We have saddle/cantle bags, but I like to keep it on me. I need to find a new phone belt carrier. They keep changing the durn phone sizes.

We had a really nice outside ride yesterday!

I untacked first and was putting Koda back in the pasture when this happened: 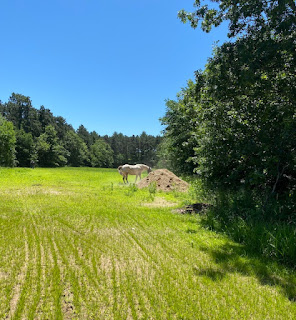 Something is wrong with this picture

Nemo doesn't like Koda being gone and definitely doesn't like Brad riding Cierra. Nemo can be a pain when the herd regroups. He often rubs his face and sometimes tries to playfully get up on Koda. I shooed Nemo away and turned my attention to getting Koda's halter off. My arm is only half way back to “normal”. The struggle is still real. I was standing by the gate, but it was open enough that the sneaky guy pranced out.

Our girls are better behaved, but Nemo is Nemo. I felt terrible!! I've never accidentally let a horse out. Guess there is a first time for everything. I handed Brad Koda's halter and quickly put Cierra away.

Nemo was having a ball running and exploring the field behind of the barn.

Our daughter came out to help. We had the main escape routes blocked. Eventually Nemo went inside the indoor, and we closed the gate.

Three horses got worked yesterday, although one was unplanned.

Oh what an adventure! Naughty horse!
One night as I was coming down our dirt road, I saw our little pony trotting in the opposite direction at 4am. Those days when he escaped, he just went to the neighbor lady's place and waited for her to feed her stalled horses. He'd claim a stall and get some grain. Then we'd go get him.
He hasn't escaped now in 6 years!

Sounds like the riding is going great. And good news on your shoulder doing better.

So glad Koda is doing great too. Good things all around.

Nemo! What a feeling to be free, huh? Until you realize you’re all alone in a scary world.

I didn’t have much luck with Cosequin either. I do still use it, though, but with the Equioxx. Riding him is the best medicine. It can get scary when they are a little lame, at least on steep terrain, but your arenas and trails look like really nice, even footing. You are blessed to have so many options, and you’re doing really well to keep him moving.

Your weather sure looks a lot better than ours, but they’re predicting a warming next week. It was in the 40’s-60’s today, and we’re heading to the 80’s. Buckle up! 🌞 yay!

Nemo was something to watch on the loose! He sure had fun exploring unknown territory and charging up the gravel pile. His high headed blowing was no doubt heard across our valley. I had a large opening to cover, and only had time to quick text our daughter for help (right before taking one pic). We needed to block the other side of the barn. An easy escape route that would have been a never ending game of follow the leader. He is the first one to come to us in the pasture, but deal is off out in the wild world. All is well that ends well.

Val, that is one smart pony! I didn't realize we are heading into another heat wave until today. Ugh! Stay cool.

Linda, one of our associate vet's has her horse on Equioxx and highly recommends it. We may end up going that route after working through options. Most of our local equine park trails have hilly terrain (some rocky) but yes, our property is mostly flat.

I’m a big fan of Equioxx and will probably put some of the other elder herd members on it soon. It has kept Cowboy alive through the last two winters. He wouldn’t be able to get up from laying down without it. Now that he’s moving a lot, I give him breaks from it to rest his kidneys. So far, his tests haven’t shown any issue.

Good to know, thanks Linda.

Happy to hear it ended well!

Sounds like you're having fun riding Koda. We also never had good results with Cosequin and use Equioxx now.It seems to work much better.

Nemo is a character! We always seem to have one horse who is a master of escape too. Glad you got him back without too much drama.