Sunday was such a beautiful early fall day! I am not sure if it was more enjoyable hanging out with our horses while working in the woods, or riding Koda & Nemo for the first time in a week?? Okay, no contest there - riding was alot more fun. So much that I didn't get any pictures of the ride. I was too busy soaking it all up.

They started taking the corn down. I wasn't sure how the boys would handle the changed view, especially the 150 ft long giant white plastic bag of corn at the beginning of our ride. We rode just a few feet away, with nothing more than a watchful eye. They did awesome, even the notorious stream of water/mud didn't get a reaction today.

Before we got to go on that glorious ride, we did more work in the wooded pasture area. Last weeks high winds led to another family “clean up the woods” day, and the realization that it will be a never ending project. The trees continue to take a beating, and are dropping like flies.

I know it’s a little twisted, but I love our “clean up the woods” days!  Spending time outside with family (equine & human) doing something physical, while making a visible difference - what’s not to love??!

Today we met my in-laws at Canyon Creek for a trail ride we've talked about doing for many years. It was commercialized, and nose-to-tail, but it was still enjoyable. My mother-in-law can count on one hand how many times she's been on a horse, so for a mixed level group - it was perfect. We had a nice guide, and the horses were well taken care of with personalities intact.

We saw several deer who just stood there looking at us common horseback riders, and rode above the Lost Canyon. That was really pretty looking down through the longest canyon in WI. I tried to get pictures of it, but they didn't turn out. They do a hitched team wagon ride through the Canyon, guess the wall are so close you can touch them. I could have easily passed on the animated tourist stuff but spending the day with Brad's parents, who planned the trip because they know what we love most, was priceless.
Posted by aurora at 9:34 PM 3 comments:

Wake up! It's 3:15am, or at least try to wake up...we need to leave by 4:00. We have a long drive ahead. First to pick up the filly, and her breeder Ashley, and then to a Futurity Show in Decorah, Iowa.
It was amazing how quiet our filly was. She was the youngest at the show. We think they both did awesome, the judges didn't agree - but that is their problem. We know they are both winners!! and we all had a good experience. The filly is now officially ours, we loaded her up and headed home. It was a long 4 hour ride plus, we got stuck in Ironman traffic. Didn't seem to bother the filly. She still had plenty of energy to get into some mischief once we arrived home, escaping not once but twice into the main pasture. She really wants to be with the herd. Brad fixed the escape route after we got back from trail riding Nemo and Koda, and found little Ms. Mischief the second time.
Posted by aurora at 1:17 AM 7 comments:

it's a pleasure, baby

Ready to ride out? This past weekend I strapped on my big 'ol camera, and lugged it on one of our trail ride's at home. I didn't take any photos on the path up to the back pasture, that's an area that requires full attention. We frequently see critters, there is uneven ground, gravel to cross on the lower part, and at the start of this particular ride the shadow riders were playing games with our boys. Funny how the open terrain changes the feel of the ride.

You will notice they just raked the hay for Koda, or that's what he thought. When we crossed over the first row to ride away from the corn, he suddenly stopped, yanked his head down and started pawing with a purpose. Brad thought it was sooo funny that Koda was trying to scoop the hay higher so he could reach it. Well, at least Koda's not dumb - altho I didn't find it very funny. Needless to say, we kept our distance from the hay for the rest of the ride.

pictures say it all

Definitely trail ride! Especially when the football game was doomed to be a shalacking, those are never fun no matter what end of the game your on. We had a nice ride, hay crop was down (again, good hay year for WI farmers). Funny to feel the expression on Koda "oh look, they cut it for me" um, no sorry bud.  We are just a'waiting for the other crops to be harvested, so we can roam alot further! Saw the big 'ol buck again in the soybean field.
It was an early sunset ride. Regardless, we headed down the highway when we got back. Proud of the boys, headlights and all didn't bother them. Nemo was the "I'll cross first culvert hero" today. Brad's rodeo admission sign went unused. It's going to be an exciting weekend - stay tuned!
Posted by aurora at 11:20 PM 6 comments:

We got another ride in this weekend, even tho we had a major downpour again this morning. Wasn't easy to find a dry level spot to warm up in the pasture, so we kept it short and only at a trot. Skipped our typical warmup ride and just headed out. It was simply too muddy. I'm spoiled and usually ride out of the pasture while Brad deals with the gate - but opted instead to walk Koda in hand up the gravel driveway, and hop on him in the grass. Why didn't I think of that before? I'm sure he appreciated it. We still have to cross some gravel on the path, but at least he didn't have to carry me across that part.
We had a nice gentle breeze throughout our entire ride. I love watching Koda's mane flow. Mosquitoes were better. Mr. Fast Forward and I led, so we changed the ride up and did our current path in reverse. I think it's prettier. As we rode up the gentle slope some yellow fall wildfloweryweeds caught my eye.  Gorgeous against the sky backdrop. Didn't even notice them riding the other way yesterday. Sure wish I had a smaller camera, so I could share the view....
Saw a turkey run into the corn to hide, and 3 crane flew up from the field. It was a good stroll. We called it quits when we got back to the pasture, and skipped the highway ride today. The ground is sooo saturated, it would have been really mushy riding along the ditch.
Posted by aurora at 7:41 PM 6 comments: 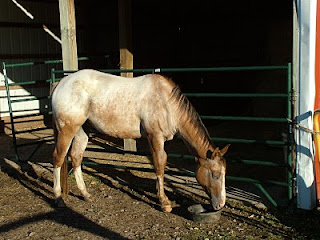 Nemo eating breakfast in the sun
I was finally able to spend some time with our horses. This past week between work, we had the farrier out, rain, appointments, rain, hockey board meeting, rained out football game,  rescheduled football game, rain, sick yesterday - but today, was a good day to ride! It had been a whole week. By the time we could get out, it started to rain. We didn't care, we did a warm-up lunge in the rain anyways - and then we all took cover until it ended. So the beginning of today's lesson was, how to take cover and remain calm in rain and thunder with your human :) Koda, Nemo, and Harmony passed with flying colors. Three horses and two humans in half a walk-in is pretty cozy. Shortly after the rain stopped, and we headed out on the trail.
Koda was on fast-forwarded, unusual for him. We tackled "the corner" before Brad and Nemo reached us. Koda circled, I thought "here we go...no we don't" and we did, walk on.

It has become clear that the gravel/rocks are really what is bothering Koda's feet, and causing the ouchy-tripping. We walk on grass whenever possible, but sometime you have to cross on gravel/rocks. I feel terrible that it bothers him. He still does his occasional lazy-itis trip in the grass, but that is different. Regardless, Koda was on forward march the entire ride. When we got back to the gravel, it was back to "stumbling". I talked to the farrier about it, he said his feet are rock solid. Shoes would help, but he really doesn't need them...
Unfortunately, sudden mosquitoes came out in force and kept us all on our toes. As usual, after our trail ride we headed down the road. Before we got to the highway, Koda balked at a small piece of white paper - like it was something. Not the norm. We rounded the corner onto the grassy wide-area along the highway, and...both horses did not want to cross the muddy culvert area today. We were both busy trying to get our horses across. Koda did his usual backing, and that's when the show started.
The mud was a long strip but only 12-ish" wide, and leads into a culvert that is huge with a white insert. Water drains into it, with the recent rain there was standing water in it.  The surrounding ground was mushy. Really, the culvert is a good thing. It takes water away from the field, and the pasture. Try convincing a horse.
Koda backed, I moved him forward. He chose to keep backing. I chose to correct him - but instead he scooted and the loose end of the rein slipped to the wrong side. I tried to get the rein back to the correct side (so I wouldn't drop it, if it came to that) and move him forward. Okay then, we'll do some circle work here instead and the mud strip won't seem so bad. He zigged. I zagged - and WHOA, I almost fell off! Thank god I was on a western saddle and not english, I was almost side-ways going down slo-mo when I grabbed the horn, and pulled myself up - as we spun in a circle. By then the cars on the highway slowed to watch, the two resident girls had run to the end of their driveway to watch, and Nemo and Brad were behind us watching the whole thing (which went on for a while). It was all surreal. Brad chuckled and said "next time you decide to put on a show and ride in a rodeo, charge admission" Ha ha, very funny.  No, Koda didn't offer to buck - but he just about spun me off. I know that wasn't what he was trying to do. I just lost my balance. What happened immediately after, made me very proud of my boy. Koda responded and moved forward, he marched right over that mud strip without so much as a quiver. Thanks buddy, for trusting me.

Nemo said "okay, I'll go too" - and we rode on. I'm pretty sure I lit up that highway. So bright that I scared some birds, they suddenly squawked and flew up right out of the corn a foot away from us and spooked Koda. I swear we jumped three feet sideways. The rest of the ride was smooth sailing. We not only walked right over that mud strip on the way back, but the insignificant white paper too. Koda earned HUGE praise for trusting me. He made my day. I love my horse. Today ended peaceful.
Posted by aurora at 1:51 AM 8 comments: