Padame's first visit went so well that plans were made before she left for her home to haul her back to our place, right before her last show. This time, changes would include riding all together. Then leaving her to be ridden alone in the arena, before all heading out together for her first trail ride.

Mother Nature's thunder storms prevented us from trail riding, but other firsts were experienced with all three horses.

It occurred to us that we have never ridden our horses in our arena with the garage doors opened. Not intentional, doors are just usually closed by the time we ride to keep bugs & heat/cold out. Add to that, Brad parked the tractor at the far end of the open door facing the arena. 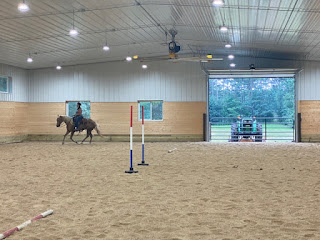 There are always tractors with arena rakes eagerly waiting to rake between classes. The tractor raised ears. All three horses took several good looks at the tractor, before realizing it wasn't a concern.

We have also never ridden in our arena when it was raining, or thundering for that matter. Or with other horses.

I haven't ridden with multiple horses anywhere, since we moved our horses home in 2018. Our horses haven't either. I was a little nervous at first (where does that come from?!) but Koda was a very good boy and the anxious feeling melted away as fast as it appeared. 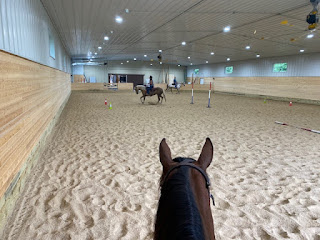 Koda, Padame and Nemo in the distance

You may notice Koda chomping, he does that when bored etc
Our ride together was SO enjoyable!! At one point I looked over at Brad who was sitting still completely relaxed on Nemo, gazing at Koda and I. He had a huge genuine smile on his face, including his eyes. His whole face expressed pure happiness. One of those surreal moments, that words cannot describe. It made my heart swell.

We all took a break from riding and walked to the house between the raindrops for a late lunch. I had warm homemade quiches waiting for us. One crab, bacon, cheese with red pepper & leeks from our garden and the other was ham, bacon, broccoli, cheese & leek. YUM!! Served with sweet watermelon.

Padame was ridden a short time afterwards, before making the hour trip home. They plan to come back to our place to trail ride in the Fall.

Our original thought with our first trailer in visitor was that we would all enjoy riding together. Reminiscent of many past years at our trainers place. She trained Koda, Nemo and then Cierra. You may recall, Koda & Nemo lived their for years while they were between homes. Instead, this visit was all about Padame. She needed our help, and we were happy to provide exposure for Brad's girl. 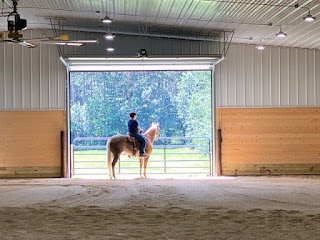 The goal was to duplicate some concerns that became apparent at a couple shows. Brad and I (and my large stuffed Rudy reindeer) became spectators.

We appeared and reappeared. Up high, down low, at gates, together, apart, at doors, at entrances, in windows etc. It was exhausting lol! We brought chairs into the arena and pretended to be judges. Hats on, hats off.

Everything was about change.

Padame wanted to avoid the judges that plopped chairs in the arena during her first official schooling trail pattern. Many horses take issue with judges. I don't blame them. Judges are scary and having them suddenly sitting inside mid arena is weird.

We dragged our feet, opened doors, waved our arms and were noisy in general. We turned the music off and everything got quiet. Absolutely everyone who comes to our place mentions how quiet it is. Horses hear everything, and quiet itself is a distraction.

Brad also rode Padame. I haven't watched them ride for a long time. Thought he might look big on his reining bred girl, but he doesn't. In fact they look great together! Yes, I am biased.

I made sure to have my camera ready to fire up in the arena, with my fav action lens (70-200). These photos are more my style. I had no idea I was going to be asked to take conformation photos prior (link above). Hopefully I redeem myself lol. I haven't shot much in our arena. It was fun practicing angles, and seeking changing light ~ in action!! 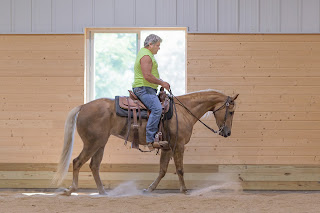 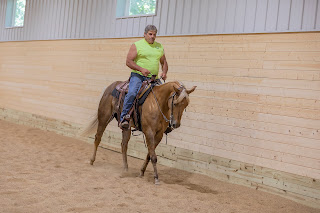 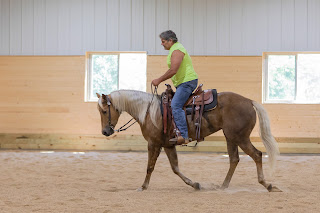 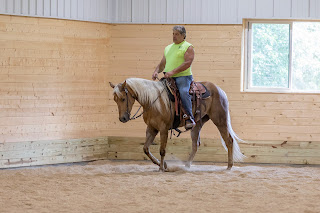 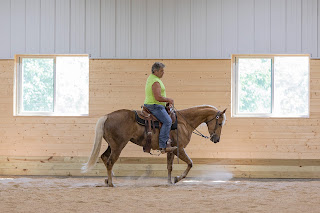 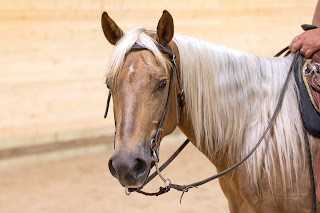 We all took a late lunch break. Brad grilled. Horsey conversation was enjoyed, over a yummy meal. Afterwards, Padame went back to the arena for round two for a much shorter ride. Typical for the show world. Ride, ride ride and then ride a little more. Padame did great. Our trainer was very thankful and felt Padame really learned a lot.

To be continued. "summer firsts ~ 3 of 3" Padame visits a second time.

It has been a quiet Summer, filled with love, joy and all things nature. I have been spending less & less time on the computer and more & more time living in the moment.

Our horseback rides are still far & few between, but when we do ride it is wonderful!

We rode 3X in July. I blogged about our first ride and second ride earlier in the month. Weather and life got in the way and we didn't trail ride again until the end of July. The bugs were bad, and we haven't ventured out on our ranch since. 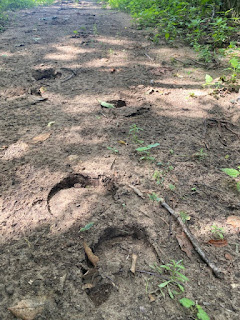 horse prints in the Enchanted Forest make me smile
We are experiencing the buggiest season since we moved here. No clue why. Perhaps because we have had a lot of off/on rain. All needed moisture and therefore welcome. I really don't mind rain in general, but I do mind relentless flying pests.

I never thought I would chose riding in an indoor arena, over riding outside in the summer.

We have watched our grandkids more often this Summer. In the past, they have helped bring horses in and feed them etc. They were SUPER excited to ride our horses for the first time!! Sorry, I decided not to share photos of the kids online. Our grands are 7, 5 and 2. Brad trusts Cierra the most, so they all rode her. First with grandpa Brad sharing a saddle, and then alone in hand. They all loved it, especially the five year old who was grinning from ear to ear.

It was the first time Cierra had kids on her back. She did great! Harmony is the only horse with any kid experience, and probably not this young. I was worried watching the littles perched up so high. They are all very tiny humans for their age. I wasn't sure if the two year old would suddenly start bawling. She didn't and they all want to ride again. I said "maybe later" to riding the last time they were here overnight and asked. We planned on letting them ride Nemo the following day (the horse they requested) but the kids had birthday party plans and got picked up shortly after breakfast.

I have buddy stirrups on order. Having balance support, will make this grandma worry a little less. Hopefully they arrive sooner than later. We will be caring for our grands again soon. It may not be me in the saddle, but it is still enjoyable horse time for all.

Caring for our herd and sharing them, has been very special.

At the end of July we had our first visitor trailer in: 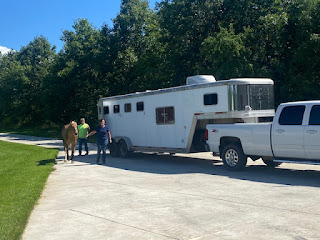 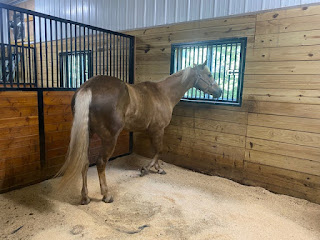 Recognize this girl? It's Padame! She needs exposure away from home, so she came here :)

I haven't seen her in person in well over a year. It hasn't worked out for me to attend her training shows this season. There is one show left. If I go, I may write a future post about her training show/s.

I was sure our herd would come thundering up from the lower pasture when the trailer pulled in, but they didn't. In fact they cared less, until we took Padame's Palomino registration photos in the yard. Then it was all eyes on the new girl.

Prior to that, Nemo was very interested in reconnecting with our trainer. He totally remembered her. It was so sweet to watch them nuzzling. Nemo turned into a big mushpot. One of the things I love about our trainer is how much she genuinely cares about animals. She loves them and treats them like they are her own. It was really nice to see her again.

Below are the registration photos that were chosen. Excuse the busy background. I was told it didn't matter. I truly dislike taking conformation photos, but hey ~ she got accepted. I learned Palomino people have ALOT of rules about color & conformation. 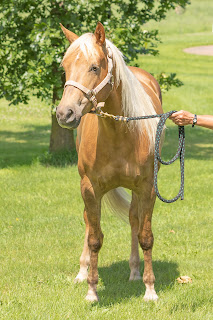 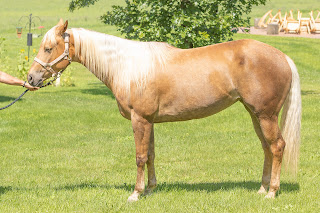 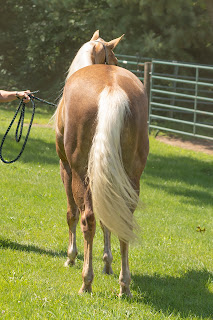 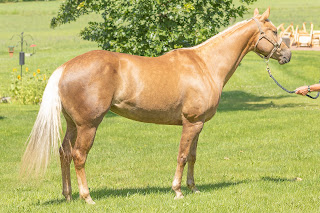 You may notice Padame is still a smaller horse. She continues looking/growing a year behind her actual age. However she has a great mind, and that is what really matters.

To be continued. "summer firsts ~ 2 of 3" will have more photos & a couple short video clips of Padame's arena time.