Another Tuesday, another trip north to the car dealer. This time to replace transmission lines on my truck. I figure it's better to spend two & a half hours waiting inside with all their amenities, than stranded on the side of some road.

Instead, I went back to the hot spot I was at last Tuesday. Before it is overflowing with fishermen and all the waterfowl go somewhere else. I have been there more than once and not seen anything but a seagull or two.

Of course, the first thing I saw were American Pelicans. They are in all larger bodies of water around here right now. There was a good sized flock of 35-ish floating around. I couldn't help but shoot one as it flew overhead: 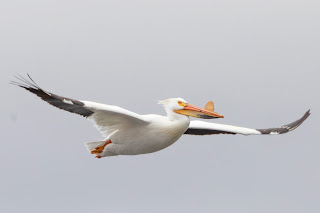 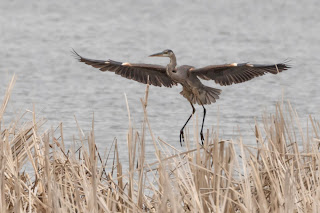 A Blue Heron flew within reach of my camera: 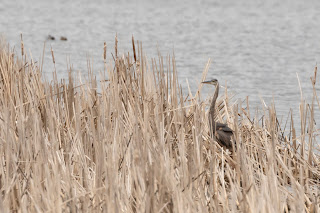 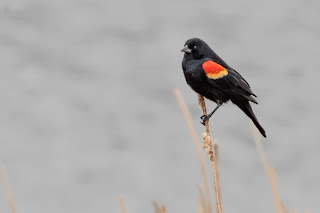 Red-winged Blackbirds were making a fuss 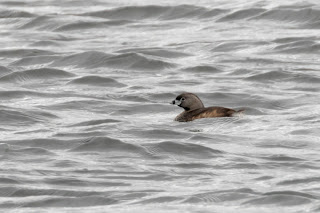 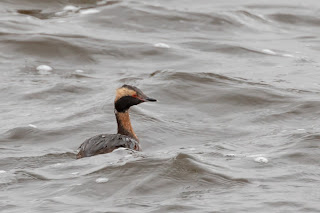 Any idea what bird this is?

It was small, and ducked under water for extended dives. It was floating alone. Notice the white tipped bill & red eye. Perhaps a juvenile of some kind of red-eyed waterfowl. An Eared Grebe??
Update: the above bird is a Horned Grebe!! The difference between Eared & Horned is this bird has a white bill tip & thicker/flatter head (and is not rare). I used Merlin’s photo ID for the first time, to confirm.

I will try to get better photos of these two, someday: 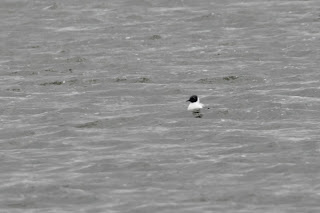 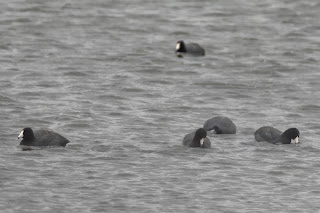 American Coot
The three amigos below caught my eye right way. I had no clue what they were. They floated on the log the entire time I was taking photos, until I pointed my camera at them. 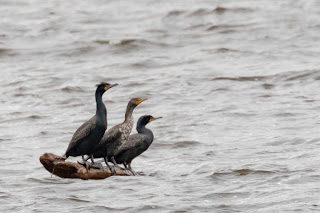 Double-breasted Cormorant
(male, female, male)
Apparently they don't like their photo being taken and took to the water. These photos are very cropped. They were waaay out in the water. 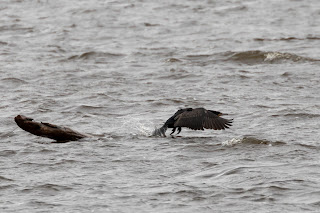 The older male went last (see trio pic above, he is far left). His mate was floating the entire time, even further out. He eventually flew over the other pair and landed near her. 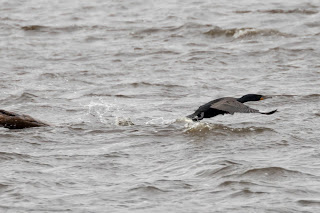 They took off so fast!! Double-breasted Cormorant have big webbed feet. It looked as if they were walking on water. I've never seen them before. They were my favorite find of the day. 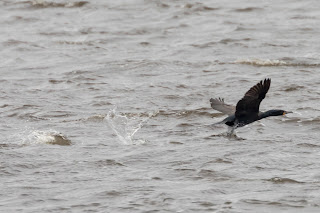 A mature pair of Wood Ducks caught my eye at the very end, right before I headed home. 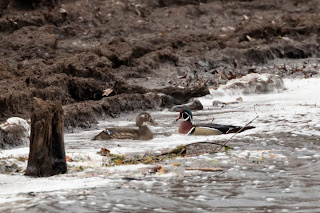 I love the name American Coot. I think my husband is an Old Coot but he doesn't like water!

Seriously, these are all great shots and I am jealous that you were able to get around and see these amazing birds. More impressive is the fact that you know what they are!

I loved paging through these shots. Beautiful!

You found some great birds! I need to get out one day soon and have a look around for ducks and others! Seems like everyday is something that needs my attention!

Great pics of all the birds! I've never seen a pelican up close but we have a heron who occasionally visits our pond. Lately, we've had an eagle hanging around too, he/she is gorgeous. Love watching it gliding in the sky.

Val, I had to look up the Grebe, Coot & Cormorant ID. After photographing a bird they are easier to remember.

I love blue herons. You found quite a lot of snap worthy subjects! I am abysmal at photographing birds. We did have a Golden eagle fly overhead the other day, and I had to smile at a Canada Goose who was trying to fly through the poplar branches by our pond today, to catch up with its mate wo was already on the pond.