Time keeps flying, weeks have passed since my last arena update. Brad has been making good progress on the interior, and I have learned a thing or two. 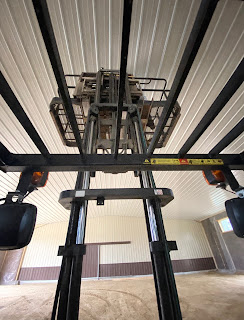 Who learns to operate a fork lift with their husband waaay up in the air?
Apparently me.

I have never operated a forklift or given a second thought to watching how they are operated, as they all but run into you at the lumberyard type stores. I agreed to lift Brad up to the ceiling so he could install the fans. Using one lever. He told me I didn't have to worry about anything else. I can handle that. Sounds easy. Well it was, until Brad was up by the ceiling. After mounting the fan, he realized the basket he was standing in wouldn't clear the end of the metal spokes when lowering him. Rut Row. Ummm, now I had to move the forklift in order for him to get down and had no idea how. Have you seen how many levers forklifts have?

Brad had to teach me how to operate the machine verbally from up in the air. I had to move the machine a very very small move or I could damage the fan (gasp!!). Not to mention the love of my life is 200 feet up in the air with fan spikes sticking out, as visions of dumping him onto the ground swirled around my head. Okay, so that height is an exaggeration - but it is what it felt like. Every machine reacts differently, one wrong move and...no pressure!! 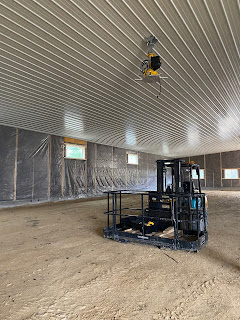 I passed the test, one fan mounted. Whew! 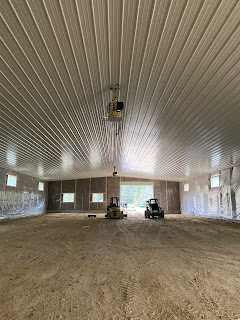 two fans mounted
Brad is still alive, and I didn't even hit anything! 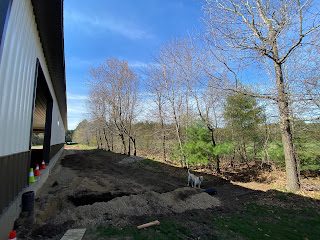 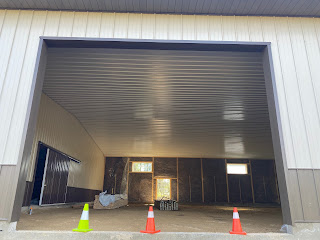 some of the interior lumber arrived

As you all know, the pandemic has created shortages and price increases everywhere. The building industry is struggling big time to get product and catch up as the world reopens. Brad stayed ahead of the waiting game and placed orders early, with prices locked in. 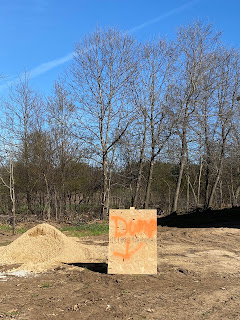 it was time for more fill

I think Brad was tired of telling companies & drivers over and over (and over) where to turn to get to the arena etc. They are still hesitant and some can't figure it out. The dirt tracks and temporary field road is obvious. It makes me wonder how some of these drivers make it through the day. 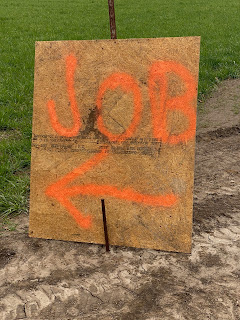 Brad works on the arena every chance he gets. He let me help with a few boards, otherwise we are all banned from helping him. The dogs, cats and I bug him check on him periodically. I find him peacefully working away on building his dream, singing along to his tunes. Brad is in his happy place. 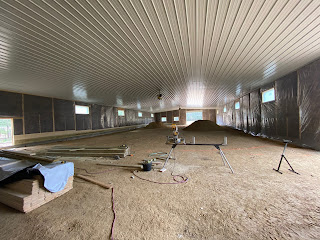 interior arena walls are going up
(mounted boards on left side)

The wood order count got flipped flopped. There is one less row of treated lumber along the bottom than planned. Brad is good with it, and the lumber count we received still works. As the arena interior goes up, we continually make adjustments. Troubleshooting and making changes are just part of the building process.

For example, see the south windows at the end (above). They were not planned. After seeing all the beautiful window light in Grey Horse Matters arena and asking questions (I am always good for that!) at the last minute, we decided to add more windows. By sharing her barn/arena info (and shed, update to come) there were some things we had not thought of. Huge thank you!! It helps to know what others do, to figure out what works for us. Although everyone's structures and elements are different, it is still helpful. By documenting our builds, my hope is it will give those facing similar decisions things to consider.

First we decided to put in three extra windows, then switched to two. Just in time, before the builders framed that wall. We are both glad we went with two windows. A third window in the far right corner is unnecessary and visually would have looked weird. Now we have some southern windows that open and let more light in! They will really make a difference. 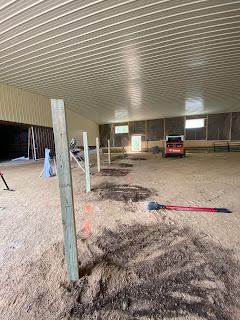 curved half wall posts are in 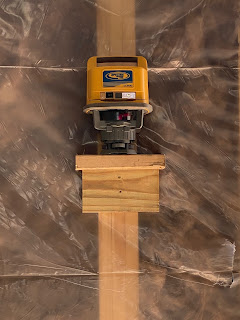 wall mounted laser
when you forget the laser stand, you improvise 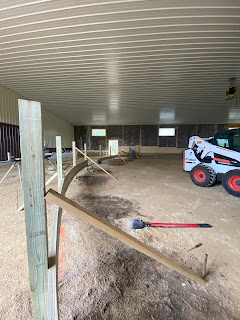 curved boards start to go up 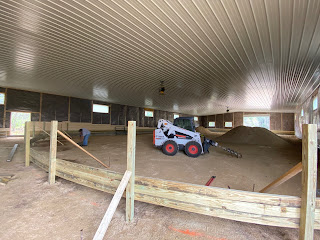 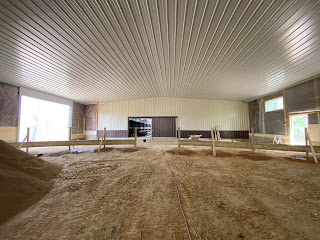 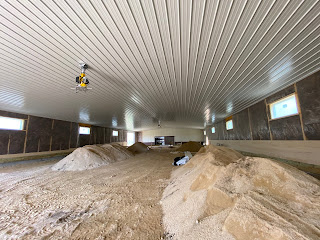 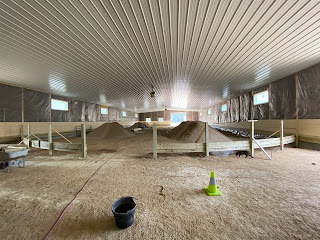 The arena is really coming along nicely. I can't believe you operated that fork lift for the first time with Brad up there. He's got a lot of faith in you obviously! Good job!
The arena is going to be awesome when you're done and more light is always good. You will get so much use and pleasure from it in the years to come. And, yes, it is amazing how some people get their drivers licensees when they can't find their way out of a paper bag. Liked your sign. Tell Brad to keep singing it will help the time fly and keep him in a good mood ;)

Curved wall? This is the first time you have mentioned that I think! I assume it is to separate the entrance/parked horses area from the riding area?
Lots of progress and good on you for cowgirlin' up with the forklift!

Wow...just wow and wowzer! Love the curved wood for the 'arena' part right? Excellent for training. I assume we will be curious until we can see what that looks like finished! :)

I hadn't thought much about all of the shortages until I talked to my son last week who is redoing his deck. Eeeks.

Operating the lift. Now I would have refused...totally. But then again I had to go watch a video to learn how to drive the skid steer one year. So kudos for you!
A new career in forklift driving? Kidding.
Good job.

What a gorgeous arena. Good call on the Windows. And good call on getting supplies early. I expect it will only get worse with the gasoline outages. I expect deliveries to get held up. We can’t even get a gate made out here because no one can find help. We have a serious supply and labor shortage.

Thanks! Yes, the half wall separates what we call the storage area from the riding area. There will be enough room for our small hay bales, obstacles etc and a horse & rider(s) to be out of the arena. Ranch riding patterns use the entire arena.

We have always planned on a half wall, but decided to go curved. It's just a better use of space. We still have two corners for those who like to take horses to pee or stand in them etc. After Brad laid the wall out (using marking paint) we actually moved it back four feet and made the storage area smaller. Should be enough for an extra stride. It is first and foremost a riding arena. We have a tendency to make adjustments as we go.

Val I did say no at first, but didn't have much of a choice. Brad had to get down somehow. I tried "let's call our son" lol. The part that made it so stressful was the forklift had to make such a small move, without knowing how the machine would react.

Hah hah. I said NO to operating the skid steer the first time he told me to do it..and the zero turn mower. Things with engines and I don't get along.
I'm glad it all ended well!

Well the forklift episode was scary...next time ask for more lessons! Sometimes men give lousy directions but it sounds like yours did great! v Your arena is just fantastic...it has ben fun to watch it come together!