We said no to watching a 4th of July parade from a friends house, going to a neighbors pool party and also decided to skip the big fireworks on the river.

No is a hard word to say, but I am learning.

All the above sounds fun, but our long holiday weekend plans were simple. We wanted to get a few more things done on our ranch, and spend time with our horses. Quiet and relaxing.

We accomplished the latter, by doing this: 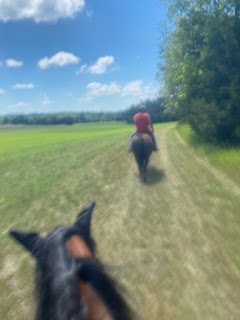 After a short baking session warmup in the outdoor arena, we headed out for a ride. The plan was to ride the perimeter of our large field. The one that borders the road, and goes along the back of our closest neighbors house.

There was a steady warm breeze, bugs were not bad.

Koda & Cierra were being so good and seemed interested in exploring the new views. We skipped the pine trails that need branch trimming, and continued riding around the next big field.

When we were within Nemo's sight, he began running, bucking and prancing around. Calling out to us from a distance.

It is never fun to ride near that level of ramped up energy.

We kept our distance & rode through the lower wooded part of our property. 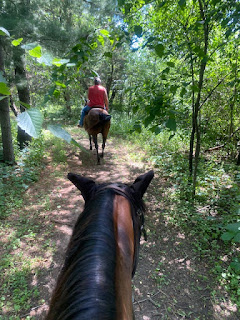 enjoying shade in the enchanted forest

There are two choices to get back to the barn, turn around and re-ride the fields or ride along the pasture. The idea was to make a loop, so we headed towards the new southern path that borders the pasture. Out of Nemo's eyesight, or so we thought. We got to the middle of the pasture path, when I heard Brad say "uh oh".

Nemo was galloping up the hill toward us. He had spotted Brad & Cierra.

Great. Nothing like being between a rock and a hard place. Or in this case, between a hot wire and trees. It was a little unsettling. Like every challenge you come upon on the trail, you have to make a decision and stick to it. I got as close to the trees as I could, and stopped. Until Nemo stopped.

Nemo was a long arm lengths away, when Koda started to pick up on his energy.

Koda was a good boy and chose to listen to me, as we picked up our walk. It helped that Nemo reeled his energy in, after we started talking to him. He walked along with us as far as the pasture allowed.

Harmony could have cared less. I am sure Nemo's separation concern will diminish the more we ride out, and next to the pastures. I found out after the ride, the wire was not hot.

Our focus quickly changed from Nemo to a big floppy branch that made it impossible to ride though. Brad dismounted and held the branch back so we could all get through. 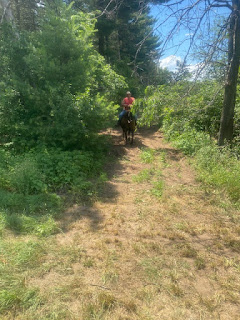 This gave Koda a chance to lead us down a wooded path, back to the barn.

We ended our trail ride sweaty and happy.

We are starting July out right.
Posted by aurora at 4:30 PM

Awesome! We had thunderstorms early and then rain and more rain, but that was okay.
I got a lot of much needed inside work done and organizing...and purging.

What great horses! I'm jumping up and down for you!
Yipee!

Good for you getting to do what you want!! :)

Good job!! Riding near home is not for the feint of heart. It sounds like Koda did really, really well containing his energy. When your buddy is running free, screaming for you, you want to run off with them. I had my first buddy ride yesterday with a herd member. It had similar, but not as dramatic, challenges. The herd is a powerful connection. Happy 4th of July!! I think staying home and riding with your sweetie was a most excellent choice.