We enjoyed a couple days of arena time with our horses earlier this week.

The first day, Brad hopped on Nemo right away and rode. Meanwhile my chunky monkey decided to act like a four year old feeling his oats. Crow hopping and spinning me dizzy as he twirled around and around, and around. Literally. Eventually, he decided to slow his roll.

Our daughter walked into the arena. She was surprised at what she saw and asked "is that normal for Koda"? I was busy being a spinning top, so Brad responded. "It's just Koda being Koda". He always says that about Koda's antics.

Koda is 14 going on 4 and full of Appytude. He may not have spots, but he is all Appaloosa. Apparently he is never going to change. In my opinion, age has little to do with behavior. Most will disagree with me. I am glad I decided to lunge Koda and see where his mind was at. At this stage of my life, I won't ride him when he acts like that. Brad has no problem with it, so he rode Koda first. Koda was the well behaved boy he can be. I enjoyed my riding time next, at a walk. I ended with doing two almost perfect turns on the forehands.

The following day, Koda was visibly stiff. I can't help he decided to act like a kite on a string. Timing is everything. Trust me, I stopped lunging when the time was right. I dislike lunging, but it can serve a purpose. I look forward to the day I can once again just get on and ride. With him, that requires consistently being worked with. He does come around quickly.

The following day, Brad worked with Koda a little to loosen him up, before riding Cierra. My shoulders were sore from twirling, saddling and even grooming. Now that I am older, I feel every "new" activity. I am thankful for Brad's help. 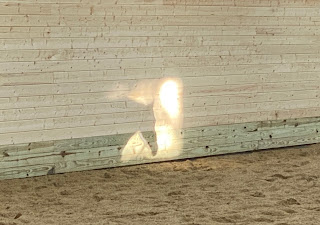 my boy shadow dancing
WI has been in an extended cold single digit pattern, dipping negative. We've been waiting to let the horses out until the sun comes up. It amazes me our arena has been staying above freezing. I feel very fortunate and still can't believe we have a giant sandbox to play in.

Hopefully we can all find our groove and 2022 will become a riding year!!
Posted by aurora at 8:24 AM

Sounds like you are getting to use your arena !!! Yes to getting back in with your horses!
We had a loud appy mule we inherited that was all 'tude! She became a pasture ornament. She'd come to us late in her life and we just enjoyed her company.

Sounds like you will get back into the swing of things!
I'm excited for you!

I think I should ride my ding dongs this year too...great goals!

I am sure they get bored with winter just as we do and enjoy getting to strut their stuff- so great that you have your own arena to play in!

So glad you are using that beautiful arena!!

That indoor arena is such a wise investment. My horses are full of it, too, but I don’t have an area to work with them. Koda is in the prime of his life! Cowboy is 27, and still has the same personality quirks! So, yes, you’re 💯 correct! The only difference is that I have had so many years with him, I know what those quirks are, and I respect them.