After my struggles last week I am savoring the feeling that comes from the satisfaction of a good ride. When Koda is good, he is golden. I am also processing, how to keep doing the right things and have less of last weeks struggles.

Yesterday we had a special ride, and advanced together in more ways than one. It is wiser to increase one aspect at a time, but it was hard to not take advantage of a good ride. It helped having unseasonably warm late November riding weather, and not rushing. This is what we found when we went out mid afternoon to get our mounts: 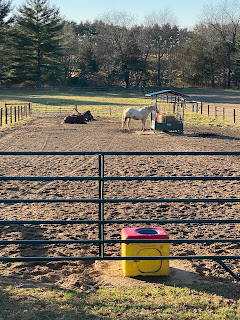 Harmony, Cierra and Koda in a row
Nemo at feeder

Let's just say nobody was coming to the gate any time soon. Brad haltered Cierra, and she didn't even move. We had to encourage both horses to get up. 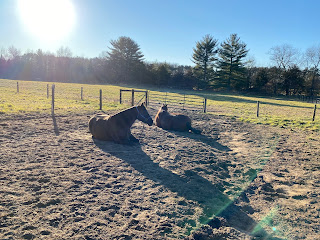 Koda enjoyed a good pre-ride groom, and after watching this video I tried the Masterson Bladder Meridian technique that Shirley suggested. I am not sure I was doing it right, but I tried. I'll have to practice more. I watched for "the signs" and found some reaction in his left side poll area. I held my hand in place and watched, he seemed to release (not as much as the horse in the video). I think Koda liked it? Not much happened on the other side. I was going too fast, knowing Brad had Cierra all tacked up and was waiting on us (always). I still wanted to brush Koda's mane & tail, and suggested Brad start without us. We usually ride at the same time, but not always. He went out to the arena, and I brushed out my boys gorgeous Fabio locks before joining them. I softly told Koda, if you just listen to me we won't have to lunge very long. And much to my surprise, he did.

Walk, trot lope progression one way and back down. Stop, switch directions without complaining. Repeat sequence. Done. Did he do a super nice warm up lope with vigor, nope. But I didn't care, I was looking for listening and no drama. He got lots of praise.

I put on his bridle and headed to the mounting block. My plan was to not adjust the block or figit, and just get on. On our way to the block, I decided to change it up and walked over poles instead of mounting. Koda is a predictor. Changing sequence helps him listen. I was about to step up on the block and he shifted his hip. Not this time buddy. I repositioned him and softly said something like, I really need you to stand still, don't know what I'll do if you keep moving. Slight tug on the reins downwards and a simultaneous "stand" And much to my surprise, he did.

I stepped up, seated myself as softly as I could and we sat there. Koda got lots of praise.

We did a variety of walking/trotting/cones etc with breaks just sitting in between. We trotted over the two ground poles for the first time, both directions. It was then I decided to lope. And much to my surprise, he listened.

We loped to the right first, just an extended corner (about a third of the arena) and got the correct lead. Yay, I've struggled getting the correct lead this direction with him in the past. It wasn't pretty, but it was without issue. We did a few other things instead of loping the other way right away. When I did ask him to lope left, he held frame for part of it and I floated on my Koda cloud :)))

Everything was going so well, I decided to try riding him outside the arena. We walked over to the gate, side passed and I unlatched the gate but didn't push it hard enough. Crap! Koda being the funny character he is, wanted to show me how it's done. Instead, he let me guide us in pushing the gate further open and walking through mounted.

I could feel Brad's eyes, perhaps filled with excitement - or disbelief, not sure I didn't ask him. I was too busy trying not to be nervous. They quickly follow us out. I circled Koda in the surrounding field, just to make sure he was still with me. We stood next to Brad & Cierra for a little while, before leading us to the nearby wooded path. Koda planted his feet. Probably because I wasn't sure if I wanted to go right and ride the path, or go left and take the field back to the barn. Brad & Cierra took the lead, and we followed them along the newly created wooded path then back to the arena field to dismount. Our first little trail ride was a success!!

After dismounting I gave Koda a well deserving looong hug, and held back the waterworks that unexpectedly bubbled up from having "that feeling" back. 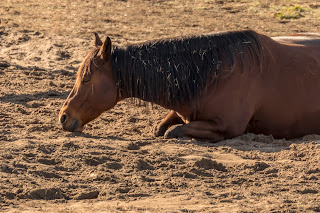 Yeah, so happy for you!! Sounds like a wonderful ride with your boy. It will just keep getting better and better I’m sure.

Awwwww this gave me a happy! So much of our interaction with our horses is about our own energy and frame of mind and I am so glad you two clicked for this ride.
When I do the bladder meridian on Gussie before riding we have the most wonderful relaxed rides. I hope you continue it with Koda.

He sounds like a great horse! Put in the time and you will get back to where you want to be. Sounds like sooner, rather than later. I’ve had a Masterson Method practitioner come out every month for my horses and I’m watching the online courses. My practitioner is also training my granddaughter, who I pay to follow up on off weeks. It tells you so much about your horse, and it solidifies trust and unity. Big time!! I cannot recommend it high enough. I’ve done chiropractor and all of it, but Masterson is the whole package.