Can you stand yet another post about fungi? I've been away for a few days and came home to find our wet woods covered with mushrooms. They were popping out of the ground just about everywhere. Much of what I saw I've already discovered (and shared) but there were a few new to me. Or at least I think they are new to me. Hard to tell with some, considering the many stages mushrooms rapidly go through.

This hard to miss phallic looking mushroom (or towering turd?) showed up late afternoon on our wooded Y path. The very next day on our morning walk, it was completely gone. 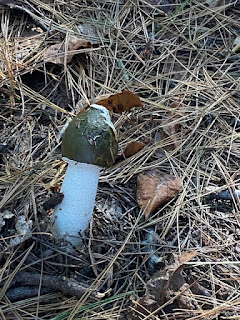 During dryer days these more ordinary mushrooms popped up off the trail: 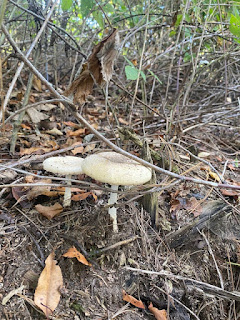 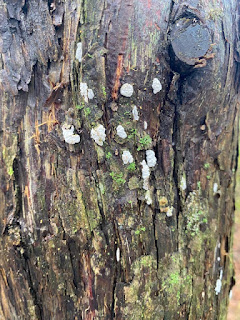 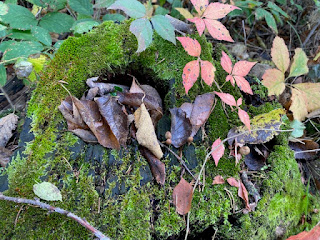 These leathery brown mushrooms have been growing a good two weeks in the middle of the Y path, and eventually joined each other. They are very visable and nothing has eaten them. 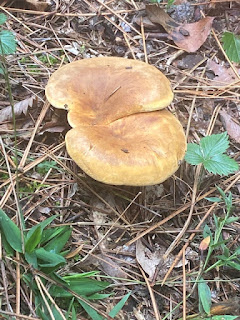 I've seen these wavy waxy mushrooms in many places. This particular one has been growing a short distance from the leathery ones above, on our Y path for over a week. When nothing touches such visible mushrooms, I can only assume they are poisonous. I believe animals are smart and have ingrained nature skills to survive. 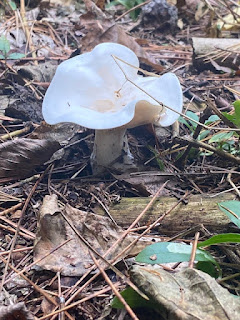 These next two mushrooms with gills, look like the same kinda 'shroom in different stages: 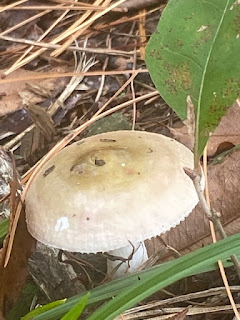 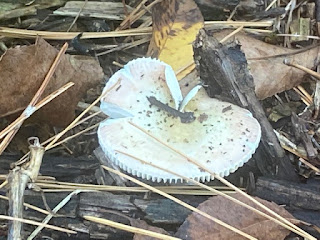 These brown tone mushrooms were just darn cute. Not very large on their own, but grouped together they are sizable. There were more than one group, this was the largest: 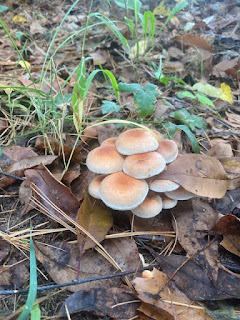 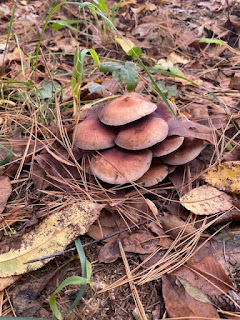 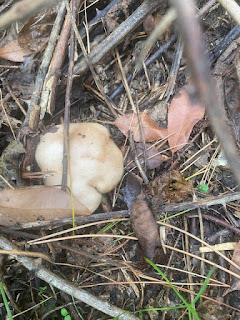 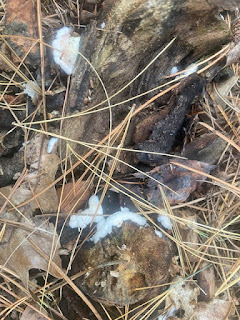 I've seen these large oyster shell looking mushrooms elsewhere, but never on our property. They were hiding and growing off a large oak tree that fell a few years back. Much larger than appears in the photo. 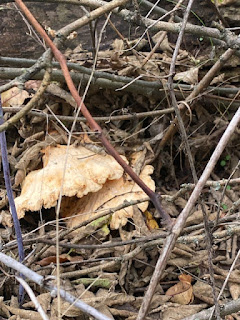 The pine floor was very wet and produced these stone type mushrooms: 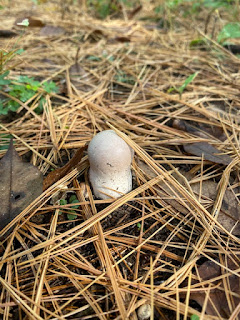 the beginning of the next two mushrooms 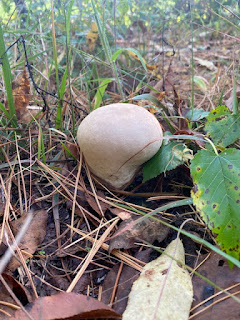 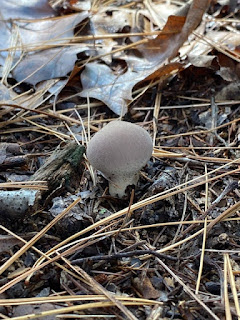 SO many different kinds of tiny parisol mushrooms, everywhere!! I couldn't pass this cute dew dropped one up. Look at how thin the stem is: 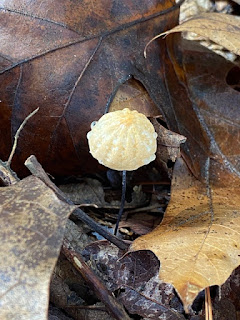 I came across what I thought was a dead animal, but with a closer look I realized they were fuzz covered mushrooms: 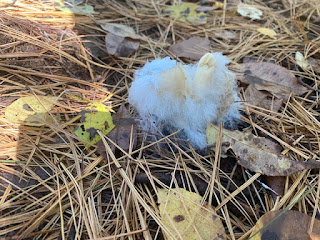 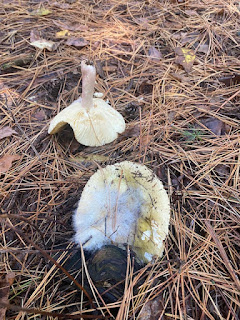 I see these in various places, stages and colors: 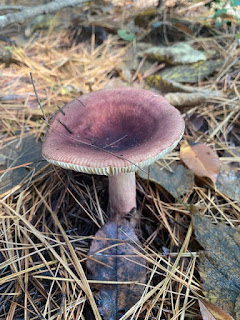 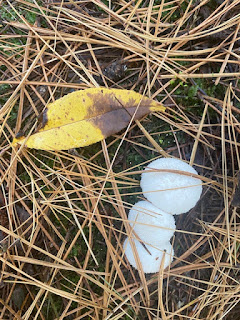 (probably should have flipped the photo) 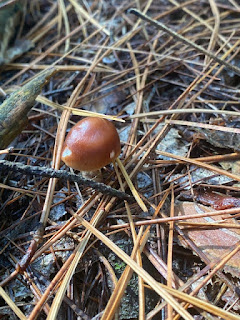 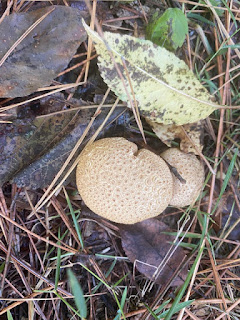 perhaps an older version of what I call a "golf ball" mushroom
(seen above as a snowman)
Today was quite the mushroom finding day!!! It turns out, fun-gal blogger Val was right about unusual fun-guy appearing in Fall.

..........
Editing this post to add another mushroom I found on my hike today. I told myself "no mushroom photos" but I must add this one: 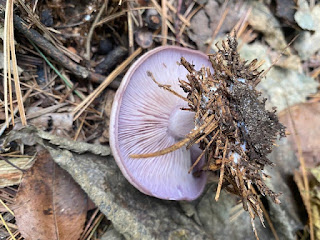 it's purpleness stopped me in my tracks

You could see a hint of purple on the top cap too. I don't normally touch or move mushrooms, but I had a feeling there was some awesomeness underneath, and I was right! There were two, in the middle of the main trail in our pines.
(my phone focused on the roots, instead of the gills ~ sorry)

That’s a lot of different kinds of mushrooms. I didn’t know there were so many varieties.

Me either. Until I moved here. They must like sandy soil.

OMG! You found a Stinkhorn you lucky duck! That is that nasty looking first one. I would have sat there all day to watch it perform. Look up a time lapse video of Stinkhorns. Very cool.

I just loved this!
I am still gathering photos of the bounty of 'shrooms and fungi that are popping up all over.

What an exciting time for you in the woods. I would like to just go and spend a whole day fungi hunting.

When winter comes in, I'll have to transition to Lichen and Moss.
Big Grin.

You mean the Stinkhorns perform...bruhaaaa ;)) I can't tell you how many times I edited my commentary on that mushroom find, to make it more PC. I will definitely look up the time lapse! Thanks, I am always learning new things from you.

I am editing this post, to add one mushroom I found today and could not leave out.

That last one is pretty cool. It could be a few different kinds but I suspect ... maybe a Blewit? I've been finding them in the leaves and they grow right from the ground.
Very pretty and strange at the same time aren't they?

Hah Hah on not being able to find a PC way to talk about the Stinkhorn. I still want to find one! :)