A couple weeks ago we went to our neighbors for an outdoor dinner & fire. They had barn kitties looking for homes, so we agreed to take two. They said they tried to socialize the kittens, but they were very scared and scattered everywhere humans weren't. Hard to pick out what you can't see. Even the mama cats ran and hid. I caught a glimpse of a cute black kitty with white tipped paws and whiskers.

Imagine my surprise when the next day Brad said we should get "two or three". Shocker! This from the guy who doesn't like cats, and has put up with mine since day one. He thinks three will increase our odds of having a couple stick around.

When we went to pick them up they corralled the 8 week old kittens, or tried to. They still hid, but were easier to find. First one grabbed was a light grey cutie, which has since turned into a love bug. He is social, funny, loves to be held and purrs the entire time. He will crawl up on your lap if you ignore him. 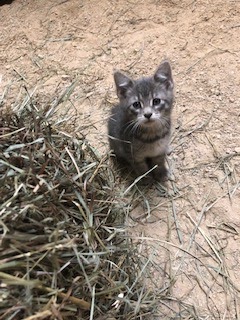 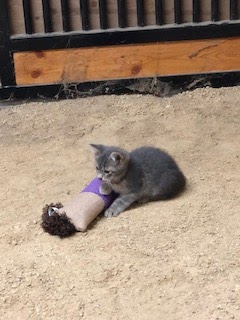 The next one to come home with us was the black kitty with white paws that I wanted. It is small and very scared. I am still not sure of it's gender, think it's a female. This kitty is also playful and very fast. It has recently started purring when held, but unlike it's grey sibling would rather not be picked up. 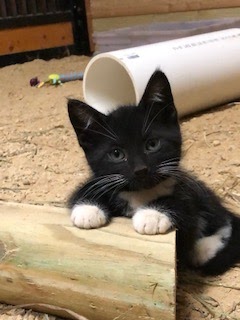 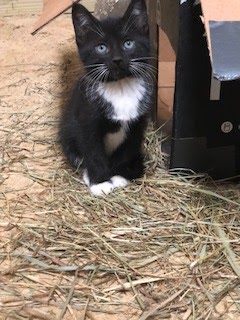 Then came the third cat. Brad's cat. I told him if he wanted three, he had to pick it out!! I only wanted two. That poor third kitty was hissing and clawing, trying to escape when it got caught by it's tail :( and then by it's back leg. Dangling. Brad felt sorry for it, and promptly spoke up saying we will take that one too. Our neighbors are very kind people, I absolutely know it wasn't grabbed that way on purpose. It was just a wild crazy one. Still is. 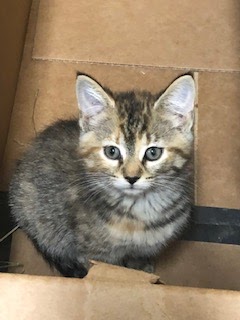 We (mostly me) work with our kittens every day, multiple times. However my patience is wearing thin with Brad's untrusting cat. After days of gentling, I tried to kindly pick it up and the silly thing went bananas. Not that I blame it after it's past experience while being picked up. HIS CAT is going to take some serious time and patience. She (I think it's a she?) is coming around at a snails pace. There are some cats you just can't hold, and I think this may be one of them. Although Brad picked her up yesterday for the first time, and she didn't go crazy. Now he is a cat whisperer too {roll eyes} !!

My family have all warned me not to get close to these kittens. I am well aware the risk of loss with barn cats is profoundly higher. I still plan to get them fixed, feed them and give them basic vet care. I don't want sick cats hanging around, multiplying. We have not named them yet, everybody asks. I have a few ideas, but they are not all PC lol.

They live in one of the stalls for now, with tall cardboard blocking the slats. I put all kinds of fun cat loving things inside for their entertainment, most of which we had. I only bought one toy, and a soft pillow type bed on sale for $11. The little busy bodies use everything. They are a hoot to play with, chasing the dressage whip around.

The light grey kitty is sooo very sweet. I am considering finding him an inside home, or he may just be a well loved barn cat. 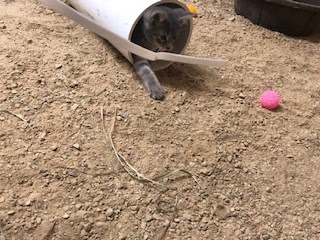 For now I am free feeding the kittens a high protein grain free dry kitten food. They also get a small can of shared wet kitten food most days as a treat, for less stress petting. I have high hopes that they will all survive, and stick around the barn. Time will tell.

Awww...kitties! I think all three will last a long time because they'll so love the barn, they'll never want to leave. But if I had to place bets, I'd say for sure the third kitty is a survivor. I love my barn cats. They keep my barn mouse free!! And they make hanging out in there extra joyful. Have fun with yours! I hope they all live long lives!

Awww my two faves- tabbies and tuxedo kittens! Every barn needs cats, so good call. No mice eating your tack or horse feed!

Linda I agree, Brad's cat has strong survival instincts. We all joke, that will probably be the only one that makes it and sticks around. I truly hope that isn't true, and they all do!! We are doing everything we can to make our barn feel like home. I think it's harder without an adult cat living in the barn as a mentor.

Shirley, I had no idea Tuxedo is a named/knick-named marking! Guess I've never seen one before. The funny thing is, that was the name I had thought of for the black kitty. I was going to call him Tux, except I think it's a girl.

Someday I'll take a good look at their genders. I'm just trying not to make them uncomfortable, and the black kitty tucks it's tail under tight lol. It's going to take more then one person to get a good look!

Finally got a good look at Brad's cat & the tuxedo one. Both are female. Boo hoo! I prefer males, but females tend to be better mousers. Guess we can figure out names now that we know what we've got. Brad wants to call them the grey one, black one and colored one (she has calico coloring mixed into her tabby stripes).

They will be given proper names, for calling back to the barn :)

They're all adorable! Can't wait to hear the names you pick. We have one cat that comes and goes. It's kind of wild and is white with grey patches so since we'll never get close enough to know the gender we just call her (I think it's a her) Patches.

They are so cute! In our experience, barn cats are tough and we've had them live for years and years. We too, do minimal vet care when it comes to our cats. We have them spayed/neutered and give them their first kitten shots. After that they are allowed to live freely on our place with plenty of food, water and freedom. And most of them warm up to us with time, but occasionally there's the proverbial "wild thang" that comes close, but never actually gentles. Different strokes for different folks!

soo cute! I wish I was closer! I could totally have given you some cats

These little ones are just too cute. We love the gorgeous-looking photos of them all. Hope they are enjoying their forever home. Have a fun time sweet ones.
World of Animals